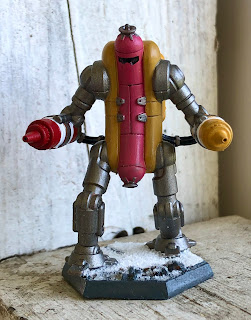 Just a quick post on a 'mech' that I painted up for a buddy of mine. He owns a Dairy Queen (and yes they also sell hotdogs) and when we ordered an ice cream cake for my GF's son's birthday a few weeks back, he gave it to us free of charge. 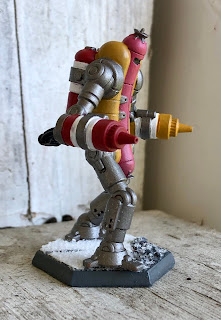 You can try to run, but this will ketchup with ya!

As a thank you I painted up this mech for him. Already laughing at it I told him that if it wasn't absurd enough already, I put it on a snowy base so that it could then be a chili-dog... Groaning at the pun, he simply turned to my GF and said I'm sorry you have to be with him (in all honesty she thought it was hilarious). 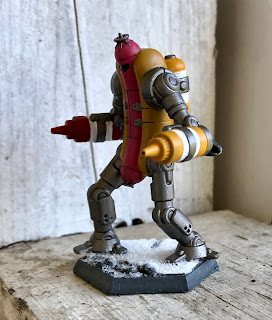 In case you're wondering, this mini is painted in the colors of the:
Draconic Combine's Mustard Soldiery...

When I last played Battletech, I had this unpainted mini standing atop my Dunkin' Davions building and it looked fantastic there. As such, I need to get another one of these for myself.