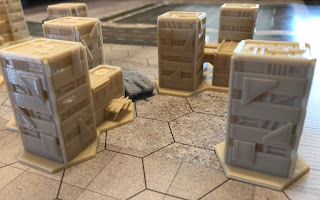 Here we see a Hetzer wheeled gun 'in the wild' and praying for the blind deployment rules that we don't use here locally...

I'm still here, not dead just nothing happening on the Battletech front for a good long while. That said, Steel Warrior Studios is moving to a new location and hosted a sale in hopes of having less stuff to physically move. I took them up on the offer and picked up another small set of terrain. 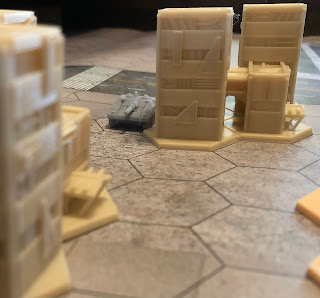 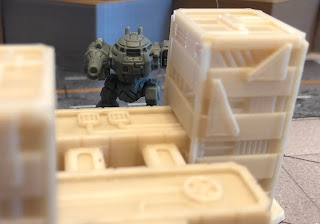 These residential buildings will make for an interesting little warren of close quarters, urban warfare. Listed as 'slums', these new buildings will give my little spaceport something it desperately needs: residential housing, retail shopping would be good too (I'll get to that in a minute...). They're all capable of blocking mechs, my Urbie especially as you can see, and the tanks simply disappear behind them.

Note the Dunkin logo is still in the wrong spot here.

These will likely replace the vast majority of my tiny little MDF buildings which all too often end up being knocked about the map, often getting in our way as players rather than functioning as obstacles for our mechs. 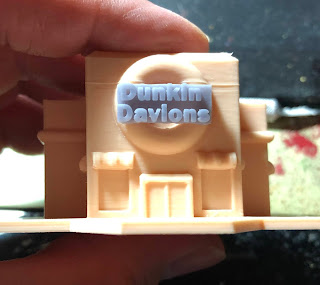 The centerpiece of this purchase is that galaxy spanning, food processing retail empire we all know and love: Dunkin Davions! Yeah a note on that...initially I thought the Dunkin Davions sign was to go on top of the building, so braced it in that position. Only until waiting for it to dry and get all good and solid did I consult the website and see that it's placed across the front of the donut.

Oh well, its fixed now. No idea as to when I'll get another game in, maybe after these are painted but hopefully before.